Nations Have the Right to Kill: Hitler, the Holocaust and War Richard A. Koenigsberg 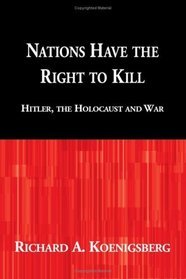 What was the purpose and meaning of this extraordinary project that the Nazis called The Final Solution? In this pathbreaking book, Richard Koenigsberg shows how genocide grew out of the logic of warfare. Hitler reasoned that if he had the right to sacrifice his soldiers, he also had the right to send Jews to their deaths.

Hitler embraced his role as military leader, stating in the mid-thirties that if millions of Germans had to die in the next war, he would not shrink from this sacrifice. Based on a meticulous reading of Hitlers speeches and Mein Kampf, Koenigsberg shows how Hitlers thinking about warfare led to his decision to exterminate the Jews. Hitler reflected that if he had no compunctions about sending the best people to die in battle--German soldiers--why would he not also have the right to send the worst people--mortal enemies of Germany--to their deaths?Nations Have the Right to Kill focuses on World War I and the Holocaust as two instances of societal mass-slaughter.

Hitler fought in the First World War, witnessed the death of hundreds of his comrades, and knew that two million German soldiers had perished. He understood that soldiers are required to go into battle when their nations ask them to do so. But if nations can ask their healthiest and best people to die, why can they not also ask their least healthy and worst people to die? Koenigsberg shows how both the euthanasia program and Holocaust grew out of this line of thought.Nazi ideology revolved around the idea that everyone was required to die for Germany. Just as German soldiers gave their bodies over to the nation-state--became obedient unto death--so Jews would be compelled to do so.

The Final Solution sought to convey the message: Do not imagine that anyone is exempt from the obligation to suffer and to die for Germany!

Comments
Comments for "Nations Have the Right to Kill: Hitler, the Holocaust and War":